Because this city can be an ideal starting point to begin your exploration of Sicily. The capital of Sicily offers in its architecture, atmosphere and flavours the Sicilian melting pot of cultures which includes the Greeks, Arabs, Normans, Moorish and Spanish whom left traces of their civilization in the previous centuries.

The city hosts the big part of “Arab-Norman Palermo” which was recently added in the list of the Unesco World Heritage Sites. There are some civil and religious structures that were built in the XII century during the Norman kingdom in Sicily that were designed with influences from the Western, Islamic and Byzantine styles of architecture.

Some sights of this city are especially unique. There is the possibility to visit in the same day three Byzantine and Arab-Norman mosaics like the Palatine Chapel, S. Maria dell’Ammiraglio and the magnificent Duomo of Monreale. Additionally, there are the street markets with their energetic vibes and bursts of flavor that can reach any taste desire, one of the most beautiful and  biggest theaters of Europe, the Teatro Massimo,  which is open for shows and tours, and the baroque churches full of marbles and stuccoes. 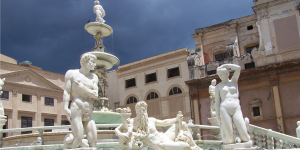