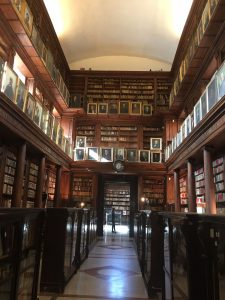 The Le Vie dei Tesori Festival is the only opportunity to discover Sicily with a unique and smart tool! Culture and beauty belong to everyone and make you feel good. The XVI edition will take place in fifteen cities throughout the island, over the 8 weekends between 10 September and 30 October 2022. It starts in September with 8 cities, for three weekends, until 25 September: Bagheria, Caltanissetta, Enna , Marsala, Mazara, Messina, Termini Imerese, Trapani. In October the baton passes to the debutante Alcamo, then Palermo, Carini, Catania, Cefalù, Ragusa, Scicli which will become large widespread museums, which can be visited with a single coupon. Terraces, gardens, domes, museums, churches, convents, palaces – most of which can be visited for the occasion – will be open and told, ready to fascinate the curious and passionate audience of the festival.
To fill yourself with beauty.

This is the description of “Le Vie dei Tesori” that you find on the official website: https://leviedeitesori.com/festival-le-vie-dei-tesori-4/

How to explain this sort of festival to our tourists? Consider that Palermo like other Italian art cities has thousands of beautiful sites  not open to the public. Well, every weekend of October ( Friday, Saturday and Sunday ) more than one hundred sites will be open for a guided tour for a cost of only 1,8 € . It’s a chance to discover what is not in the usual tourist routes doing it together with the citizens of Palermo, walking in the historical center and going from place to place.

October is a perfect time to visit Sicily, the weather is still mild and we wear cotton clothes and sometimes a sweater in the evening.

Imagine a cluster of houses located near an ancient cave, where you can experience the life at the end of the 19th century with all the peculiar crafts in an old village in Sicily as well as the nativity in the hearth of a cave, thanks to the work of an entire community. This the “Presepe”of Custonaci that takes places for a few days from Christmas to the Epiphany in the Mangiapane Caves in western Sicily.

What is unique is not only the location, but expecially the way you experience these scenes of everyday life; just looking from the doors or the windows of this little village. The tools, the clothes, and the products are all real, there is nothing fake. The people of Custonaci, involved in this big set, seem to enjoy what they are doing, and can interact and explain their work. The atmosphere is magical and the reconstruction is absolutely authenthic. 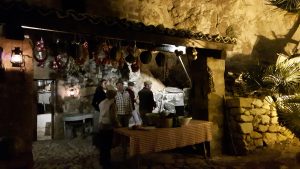 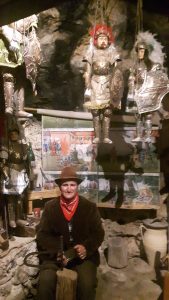 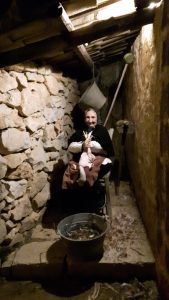 This is a video about Sicily by Alessandro Liggio. What made me happy was to find in the first seconds  ( from – 3.50 to – 3.20 ) images of the coast of Mongerbino and Capo Zafferano, the view we have from the terrace of Villa Laura Marie. All the rest is the beauty of Sicily .
Visit Sicily this year!

In this beautiful image ( by Groucho on Flick-r ) you see Mondello. This beautiful beach very close to Palermo is the easiest place where you can go to breathe sea air and swim even in Spring and Autumn. We consider it a part of the city, the perfect place for a walk for us, the Sicilians, used to enjoy being by the sea. With its ArtNoveau villas and pier Mondello has always a certain charm ; a big part of the beach is private but it’s possible to rent at a reasonable price loungers and umbrellas . The clear sand creates this limpid turquoise water that you can find all year except only for July and August when too many people use the beach.
This beach is at 41 Km from Villa Laura Marie and at 10 Km from the center of Palermo.

The link to this image on Flick-R is :  Mondello by Groucho on Flick-R

Cefalù, at 72 Km from Palermo, built under a rocky crag and with a picturesque center offers a variety of attractions. From the cathedral, built by the Norman king Roger II in 1131 and part of the Unesco World Heritage site, to the beautiful beach right in the center of the little town and the medieval cloyster to name a few. 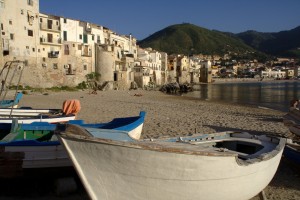 As written in the “Lonely Planet” guide, : “the town is perfectly suited to slow pedestrian exploration. The little port is lined with fishing boats and populated with fisherfolks ….the ‘lungomare (seafront promenade )is popular for the ‘passeggiata’ ( evening stroll ) as is the main street, Corso Ruggero. 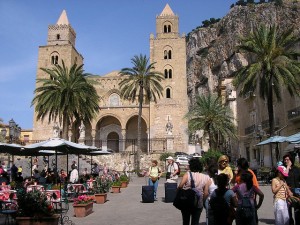 I personally find Cefalù really enjoyable, easy to reach from our house ( 57 Km and about 45 minutes by car ) , full of little shops and restaurants ( try some of them that are not too touristic !). I wouldn’t miss sitting at a table in piazza Duomo, just in front of the church, to have a Sicilian dessert or an “aperitivo” ; and what about having lunch or dinner at one of the restaurants with a sea terrace ? Go during the week if you prefer a quiet visit or viceversa on the weekend if you like to see a lot of life.

The fountain of Piazza Pretoria, situated in front of the City hall, can be considered one of the major landmarks of Palermo. Designed by Francesco Camilliani for a Tuscan villa, was brought in our city in 1573. Note its concentric circles and the number of tritons, nymphs, gods and youths. For this abundance of nude statues this square was nicknamed    “Piazza della Vergogna”   ( the Square of Shame ) . 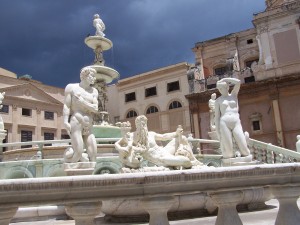 One of the photos and the video are taken last October during “Le Vie dei Tesori” ; during all the weekends of this month more than one hundred sites  ( Palaces, churches, gardens, museums etc. ) are open to the tourists  with guided tours. . For our climate and this opportunity, October is an excellent month to visit Palermo and Sicily. 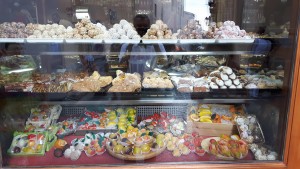 Here are two photos taken in Cefalù in a pastry shop near the Duomo .

In one of the photos there is a tray of cannolis  ; this is a typical Sicilian dessert made with tube shaped fried pastry shells cannolis and fresh ricotta ( this means Sicilian ricotta produced the same day ) usually  filled at the moment . In Sicily ricotta is made from sheep milk and you can have the best  in autumn, winter and spring. You can find cannolis in other Italian cities and in other countries but for sure ( I know for a fact ! ) here it’s the best due to the ricotta.

The colored little fruits are Marzipan; we call them also “frutti di Martorana” because they were originally prepared by the nuns of a church in Palermo called the Martorana . Marzipan  is made with almond and what is more typical reshapes into miniature fruits and vegetables. Sicilian desserts are of course really good and always esthetically beautiful.

Cefalù is  worth for sure a visit, but you have also a lot of pastry shops in our area . I would mention for now “Don Gino” and “Bar Ester” in Bagheria; more information in another post.

I wanted to post some of the activities ( exibition, concerts, events etc . ) that will take place in our city this year, being Palermo the Italian Cultural Capital for 2018. I figured anyway it would have been difficult for someone who has never been in Palermo to imagine these activities without an idea of the context; so why not a short video that gives a general idea  of the topic places and does it from the sky.

You will see the Palermo Cathedral, the Duomo of Monreale and its cloyster, all part of the Unesco site . Too bad that day the weather was not so good ! 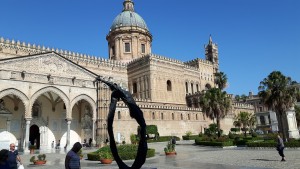 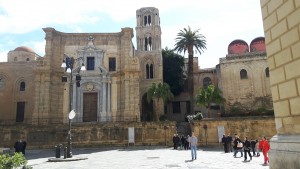 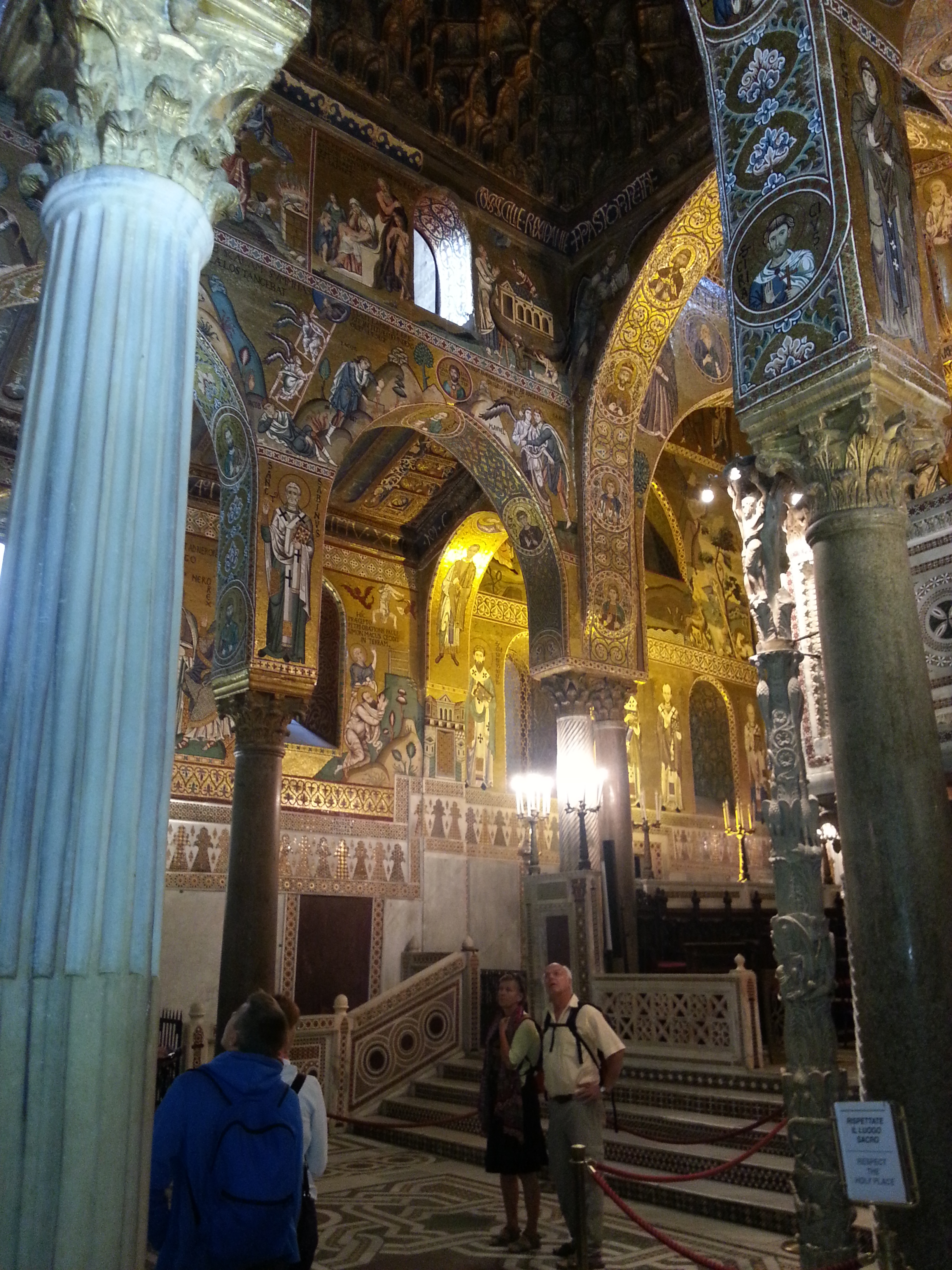 I posted a few months ago a video of Julien Zolli about Sicily . He posted now a very beautiful video about our island and its diversity which is probably a work in progress for “Sicilian Secrets” . I really like it and I think it communicates some emotions; it’s enough for me to drive some curiosity about Sicily . So … enjoy it in full screen ( it’s friday  😊